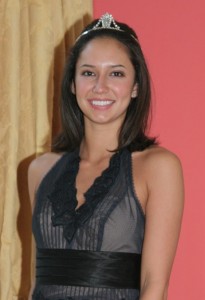 Iota Iota is proud to announce Alexa Stabler, Phi Mu ’09, was elected Sigma Chi International Sweetheart at the 77th Grand Chapter in Charleston, South Carolina, over the 4th of July weekend. Alexa, a summa cum laude graduate of the Capstone, will attend the University of Alabama School of Law this fall. She continues a proud Iota Iota tradition by becoming the fifth sweetheart from our chapter to hold the title. The last to do so was Lisa Wheeler in 1985. A group of 14 undergraduates and alumni made the trip to Charleston to help campaign for Alexa and was by far the largest delegation to attend Grand Chapter.

We hope all Iota Iota alumni will take pride in Alexa becoming the 32nd Sigma Chi International Sweetheart. She will serve in her role until the next Grand Chapter is held in 2011. During that time, she will travel across North America visiting various chapters and serve as an ambassador for both Iota Iota and all of Sigma Chi. The undergraduates deserve tremendous credit for a job well done on Alexa’s election.